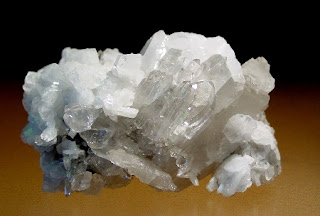 I am a collector of minerals and rocks. A recent acquisition of mine is a number of specimens of Albite with Quartz and Sphalerite from Rosh Pinah mine in the south of Namibia. On first seeing these specimens, I assumed that the white crystals were calcite, but looking a bit closer they seemed to be something different. I removed a small section of a crystal from the back of one of the specimens and had it identified by XRD for crystal structure and SEM for it's chemistry. Both techniques confirmed that the mineral is albite. This came as a surprise as the albite is typically found in volcanic and metamorphic rocks and not (or rarely) in sedimentary rocks as is the case at Rosh Pinah. I did some research on this and consulted several geologists and the consensus is that the albite crystals could have been formed in a late diagenetic stage at low hydrothermal temperature and be related to hydrothermal post-ore fluids. So, this was as far as I know the first find of well crystalised albite from this mine and also perhaps the first time it has been positively identified by proven scientific means from this locality.

Allan
Posted by Allan Fraser at 6:12 AM