The Universe – Cause and Effect

The Universe is an unimaginably massive and complex system. Everything we know about the Universe points to it operating by absolute physical laws of cause and effect. The Universe, however, does not look like one in which an independent outside agent is intervening, nor is it a Universe in which miracles happen and physical laws are violated by an entity that is above these laws. The application of Occam's razor deletes the hypothesis of a supernatural origin of the universe. And every attempt to demonstrate the existence of any supernatural force affecting the universe fails through rigorous scientific examination. Cosmology provides explanations for how, out of a singularity and subsequent explosive expansion 13.7 billion years ago, the universe came into being.
Posted by Allan Fraser at 11:26 AM No comments: 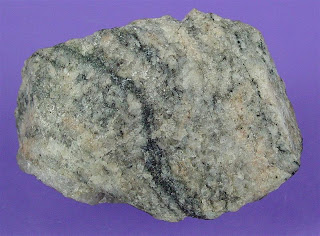 It is generally accepted that the age of the Earth and the rest of the solar system is about 4.55 billion years (plus or minus about 1%). This value is derived from several different lines of evidence. Unfortunately, the age of the Earth cannot be determined directly from material that is solely from the Earth. Meteorites have been used to date the age of the Earth as these and the other planets were formed at the same time. The Earth is a dynamic planet and the processes of erosion and crustal recycling as a result of plate tectonics have destroyed the entire earliest surface of the Earth. The oldest known exposed rock outcrop found so far is that of the Acasta Gneiss in Canada. The Acasta Gneiss was dated by radiometric means at 4.2 billion years (4.2 Ga) in age (Tsuyoshi, 2007). And, I have a specimen of the Acasta gneiss!
Posted by Allan Fraser at 10:29 AM No comments: