Your Mineral Specimen has been Impounded!

As a collector of mineral specimens I often purchase specimens over the Internet. I frequently buy from mineral dealers that specialise in minerals from Peru as I have an interest in minerals from that country. In April 2008 I ordered a mineral specimen from a dealer in Arizona who happened to have a few really neat Peruvian pieces for sale on his web site. After some negotiating of the price I purchased a specimen of aesthetic crystals of siderite, tetrahedrite, chalcopyrite and arsenopyrite. The dealer told me that he had purchased the specimen from a Peruvian dealer at the 1989 Denver Show and that the specimen was from the famous Pasto Bueno mining district. I asked the dealer to ship to specimen to me in South Africa and I further advised him to send it insured with some form of tracking number. With a tracking number one can monitor the progress of the parcel as soon as it comes into South Africa and this is done by simply logging onto the local postal services web page. Directly after my purchase I was advised by the dealer that the specimen had been shipped. I enquired as to whether the parcel had been insured and if he could give me the tracking number. After a week went by he responded to say that he could not insure the specimen and that he has no tracking number for it, but he confirmed that he had indeed mailed it to me. I was concerned with this as it made the parcel vulnerable to theft or simply getting lost in the postal system. A month later the parcel had still not arrived, but I had in the past waited for up to 3 months for a parcel to arrive from Peru so I was not too concerned at this point. I became very concerned when the parcel had not arrived at the end of June. I contacted the supplier again and he suggested that we wait a few more weeks for its arrival. He assured me that if I did not receive it he would refund me in full. Around that time I had read of the theft of mail by local postal workers and how it was on the increase. I imagined the worst - my parcel being stolen by a postal worker who had considered it worthwhile to steal due to its higher than usual weight. I further went on to imagine that the thief had opened the parcel, found what appeared to him to be a worthless rock and had thrown it by the side of a road. It seemed so tragic an event that this specimen may have ended up this way if one considers its formation, geological history and uniqueness. The various carbonate and sulphide minerals would have crystallised in a large rock cavity around 25 million years ago, precipitating from cooling hydrothermal fluids and changes in pH deep within the tectonically active Peruvian Andes. In 1989 mining activity would expose the pocket allowing the light from a Peruvian miner's headlamp to penetrate the darkness onto masses of golden glistening chalcopyrite, quartz and black lustrous sulphide minerals. The miner would have painstakingly removed as many specimens as he could before further mining activity would send them to the crusher. He knew the value of these specimens and taking care that they were not damaged during their removal would mean he could sell them for a few more dollars to supplement his meager pay. One of the specimens he removed was sold to a dealer at the Denver Show in 1989 who placed a picture of it on his mineral web site, which turned out to be the specimen I purchased.

In the middle of September I still had not received the parcel and had not been refunded by the dealer. In late September I received a letter from the customs office at OR Tambo International Airport. The letter stated that an overseas parcel of mine had been impounded as the contents contained iridium and other precious metals. I was astounded! Iridium* is one of the rarest elements on earth and customs had apparently found enough of it in the mineral specimen to impound it! I was told by customs that the parcel had been opened and since the content was not something they recognised, they contacted the South African Diamonds and Precious Metals Regulator (SADPMR) to inspect the specimen. The specimen was analysed by an inspector from SADPMR using a hand-held Energy Dispersive X-Ray Fluorescence spectrometer (EDXRF), which according to the inspector had “detected” appreciable amounts of iridium in the specimen. On that basis the SADPMR advised customs to impound the specimen and have me apply for a license to be in the possession of “unprocessed precious metals”. I was further told by the DPMR that if I disputed their findings the DPMR would have the specimen analysed at Mintek at my cost. I called the inspector at the DPMR that had done the analysis and he very proudly confirmed that he had found iridium in the mineral specimen. As an analytical chemist I have built a career on analysis of materials and I know only too well the pitfalls that accompany chemical analysis, especially where trace element analysis is concerned. I argued with him that a hand-held XRF ('ray' – guns, as I later started calling them) with which he performed the analysis would not provide enough sensitivity or optical resolution to detect iridium at low concentrations. Even detection of an element with such an apparatus does not guarantee a quantitative result. The mineral specimen would also contain large amounts of the elements, iron, copper, carbon, arsenic and other metals and these would all contribute to what analytical chemists call “matrix effects”. These matrix effects would completely mask the presence of all trace elements and give a false positive result for iridium. The analysis of iridium in a complex matrix such as this mineral specimen would be at best a challenge even for large Wavelength Dispersive XRF instruments that have higher sensitivity and resolution and are designed for low-level elemental concentrations. With this in mind I threw a barrage of questions at the inspector about the integrity of the analysis and how could he be sure that iridium had been found. He could not answer any of the questions with confidence and he had not even the slightest idea of what I was asking when I asked him to quote the detection limit of iridium for the hand-held XRF he used for the analysis. The detection limit being the lowest quantity of a substance (in this case iridium) that can be distinguished from the absence of that substance within a stated confidence limit. Every analyst doing trace element should at least understand this and be able to quote the detection limits for the analytical instrument they are using. A hand-held XRF would be effective for say, determining whether confiscated metal bars or ingots were made of pure cast iron or pure iridium. In this case the concentrations of the metals making up these materials are in the very high per cent levels and in this sort of application the hand-held XRF can be effective and I can see why Customs make use of them. However to use an instrument of such limited analytical capability in an attempt to detect trace elements and then still base their decisions on whether to impound a specimen or not on their sketchy results is ludicrous! The analysis report of the DPMR (see below) concludes that the specimen contains 3.45% iridium, 0.49% rhodium, 0.37% gold, 0.31% palladium and 0.13% of ruthenium! The iridium concentration they report is therefore more than 8 million times higher than iridium levels found in the Bushveld Complex! One can make the same conclusions of the other precious metals. After 3 months of receiving the notification that the specimen was to be impounded and after having to provide an affidavit that I would only use the specimen for “display” purposes I was issued with a letter (see below) allowing me to be in the possession of the specimen. From the time of placing the order with the buyer to claiming the specimen took a period of 7 months. The letter concludes that “the amount of precious metals in the specimen would make the extraction non-viable”. Gee, at the levels of precious metals they found I should give up mineral collecting and head for Pasto Bueno in Peru and start mining the richest precious metals deposit on the planet! 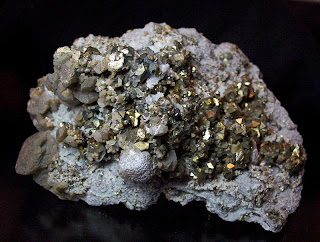 The mineral specimen impounded by SA Customs for having 3.45% Iridium and other precious metals


*Additional information on Iridium:
How abundant is the element iridium on Earth? Iridium is a "platinum-group" metallic element that is very rare in the earth's crust. The platinum-group metals include platinum, iridium, palladium, rhodium, ruthenium, and osmium. In the Periodic Table of the Elements, these metals are also in the same columns as the Group 8 elements, which include iron, nickel, and cobalt. Group 8 elements all have a natural chemical affinity for each other, and therefore they tend to collect together in nature. The greatest concentration of iron on Earth is at its core. This is also where the greatest concentration of our planet's iridium resides. When our planet was still forming iridium and iron formed an alloy and sank into the interior of the planet forming its core. At the surface of the Earth, there are only a few environments that contain more than a trace of iridium. Volcanic and plutonic rocks that are rich in iron minerals, such as peridotite, some basalts, and some gabbros, occasionally contain enough platinum-group metals to be profitable to mine. However, these ores are rare. The Bushveld complex in South Africa is one of these rare orebodies that is host to relatively high precious metal concentrations and even then these are at the parts per billion level. In a typical analysis of the Bushveld Complex rocks bearing iridium, this element is only at an average of around 4 parts per billion or 0.0000004%. Iridium is even rarer in sedimentary rocks - in a randomly selected rock weighing one gram, the amount of iridium contained within it would be less than 1 billionths of a gram (1 nano gram). In fact, the amount of iridium is often so low that it sometimes cannot be measured at all using today's scientific equipment without making use of special pre-concentration techniques.

6.Michael J. Benton. When Life Nearly Died – The Greatest Mass Extinction of all Time
Posted by Allan Fraser at 8:16 AM